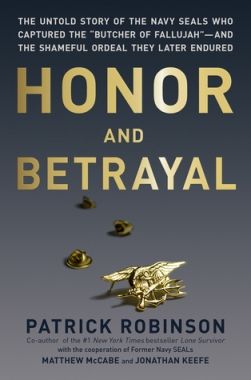 Greg McCormack was retained to represent Petty Officer Jonathan Keefe, one of three Navy SEALs who faced court-martial for alleged detainee abuse of the terrorist who has been identified as the mastermind behind the infamous Blackwater Bridge incident in 2004 where the bodies of 4 Blackwater security members were mutilated, and hung off of a bridge in Iraq. PO Keefe was charged with failing to safeguard the detainee after his capture by the SEALs, as well as false official statement when he denied to NCIS having any knowledge of the alleged detainee abuse.

PO Keefe was charged with failing to safeguard the detainee after his capture by the SEALs, as well as false official statement when he denied to NCIS having any knowledge of the alleged detainee abuse. When the Government refused to produce the detainee at his client's trial, Mr. McCormack moved the court to compel the Government to produce the detainee - the court granted the motion, but ordered the trial to be held in Baghdad. Prior to trial, Mr. McCormack moved to suppress the statement that his client made to NCIS (that he did not witness any abuse), because that statement was the basis of the false official statement charge - that motion was also granted, which resulted in the withdrawal of that charge.

Mr. McCormack then traveled to Baghdad, where he took his client's case to trial by military judge alone - PO Keefe was found NOT GUILTY, not only saving the career of an outstanding Navy SEAL, but also helping to protect our military personnel against the ever present false claim of "detainee abuse" by the terrorists that are captured by our armed forces in our country's battle against terrorism.

To read more about this story, purchase a copy of the book Honor & Betrayal: The Untold Story of the Navy Seal Who Captured the "Butcher of Falluja" - and the Shameful Ordeal They Later Endured by Patrick Robinson (author of Lone Survivor, The Eyewitness Account of Operation Redwing and the Lost Heroes of SEAL Team 10, now a major motion picture featuring Mark Wahlberg).

Along with a strong focus on successful results, the entire team at McCormack & McCormack is committed to providing our clients with the exceptional legal service that they deserve. When we agree to represent your case, we will take the time to build a trusting attorney-client relationship. In doing so, we believe that we will be better prepared to address the unique circumstances of your case and provide you with the personalized guidance that you will need during this difficult time. To fulfill this promise to our clients, we have employed an extensive support staff of highly experienced paralegals. By ensuring that each and every case receives the attention that it needs, we have found that our clients feel comfortable in the hands of our dedicated team.

Why Hire A Criminal attorney