When representing a member of the military accused of sexual assault under Article 120 of the Uniform Code of Military Justice (UCMJ), we frequently encounter the assertion that the alleged victim was not capable of consenting due to being under the influence of alcohol. Upon conclusion of presentation evidence at trial, the Military Judge will instruct the court members as to the elements of the offense which must be proven beyond a reasonable doubt by the Government, using the following template:

Sexual Assault When the Victim is Incapable of Consenting

(2) That the accused did so when (state the name of the alleged victim) was incapable of consenting to the sexual act(s) due to (impairment by a drug, intoxicant, or other similar substance); and

(3) That the accused knew or reasonably should have known (state the name of the alleged victim) was incapable of consenting to the sexual act(s) due to (impairment by drug, intoxicant, or other similar substance).

“Incapable of consenting” means the person is incapable of appraising the nature of the conduct at issue or physically incapable of declining participation in, or communicating unwillingness to engage in, the sexual act at issue. (A sleeping, unconscious, or incompetent person cannot consent)

The obvious issue which must be addressed by the court is at what point is a person under the influence of alcohol incapable of consenting? From a defense perspective, that brings into concern the sexual assault awareness training that military members receive as to a person’s ability to consent to sexual activity after drinking alcohol. Frequently we see court members who have received training that a person is not capable of consenting after one drink. That training is incorrect and extremely misleading, and if that mindset is allowed in the deliberation room, many individuals accused of sexual assault will be improperly convicted. To address that problem, the Military Judge will likely instruct the members that in determining the innocence or guilt of the accused, the members must disregard the training they have received as to the interaction of alcohol and sexual activity. The court members have the responsibility to determine if the alleged victim was in fact “incapable of consenting” and in doing so, only evidence property admitted during the trial may be considered.

In defending an accused facing this issue, the defense counsel will likely submit a request for appointment of an expert consultant in the filed of forensic toxicology. Upon approval of the request by the Convening Authority, the expert will be provided with all relevant background information and reports of investigation necessary for the expert to render an opinion as to the blood alcohol concentration at the time of the sexual activity. In rendering that opinion, the expert needs to be aware of the individual’s height, weight, approximate time of last food ingestion, the period of time that alcohol was being ingested and the time lapse between last ingestion of alcohol and the subject sexual activity. Any opinion that is rendered is cognizant of the fact that people have different rates of metabolism and excretion as well as other medical issue that might exist. Upon forming an opinion as to the determination of blood alcohol concentration, the expert will then be able to render a further opinion as to the stage of alcohol influence, as well as the clinical signs and symptoms. The toxicologist may refer to the guidance provided in the chart below in rendering his/her opinion: 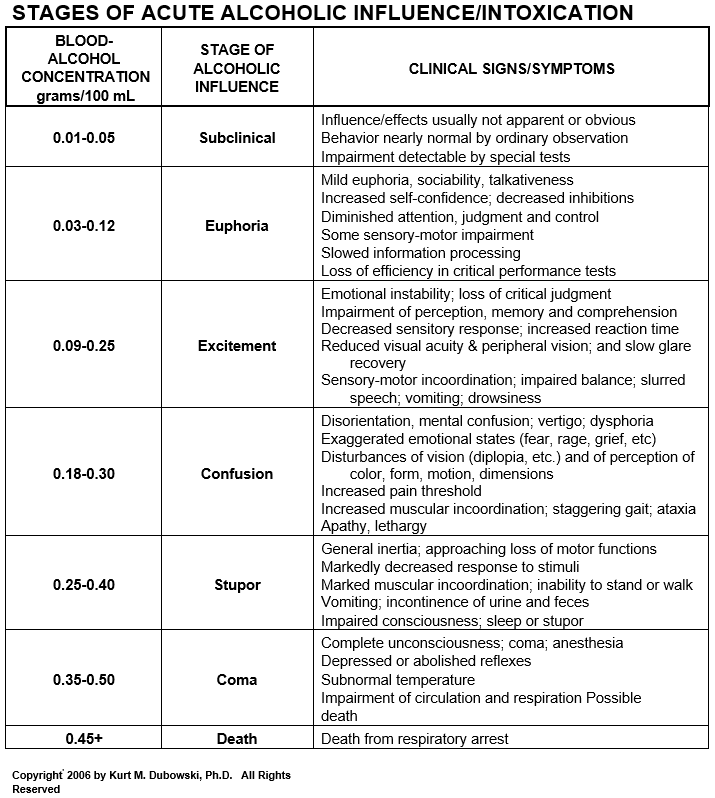 A common reference to a level of intoxication is .08 BAC which most people are familiar with concerning driving under the influence. As you can see from the chart, a person having a BAC of .09 is likely to experience impairment of perception, memory and comprehension, decreased sensory response, increased reaction time, reduced visual acuity & peripheral vision, slow glare recovery and sensory-motor incoordination. The question in the prosecution and defense of a sex assault charge is if the alleged victim reportedly had BAC of .09, was the individual incapable of consenting? Although the expert will be able to render an opinion as to the clinical signs and symptoms at the level of intoxication, the expert will not likely be permitted in court to render an opinion if that person was incapable of consenting due to the fact that it is an ultimate issue to be decided by the court members. However, if the expert had been able to render that opinion, it would likely be that NO – a person with a BAC of .09 was not incapable of consenting.

So the question that the court members have to determine is at what level of intoxication would the alleged victim be incapable of consenting? Looking at the chart, it would appear that at a level of .18 BAC, in the stage of CONFUSION, the alleged victim would likely be disoriented, with mental confusion, vertigo, exaggerated emotional states (fear, rage, grief, etc), disturbances of vision and of perception of color, form, motion, dimensions, increased muscular incoordination, apathy and lethargy. Is that individual incapable of consenting to sexual activity? What if the alleged victim was determined to be in the stage of STUPOR with a BAC of .25 or higher where the person would likely be experiencing approaching loss of motor functions, markedly decreased response to stimuli, marked muscular incoordination, inability to stand or walk, vomiting, incontinence of urine and feces with impaired consciousness involving sleep or stupor? Again this is an issue the court members have to determine.

As you can see, the determination by the court members as to if the alleged victim was capable or incapable of consenting is based upon a number of factors. As would be expected in a case of this nature, the alleged victim would likely assert on direct examination that he/she had ingested alcohol to the point of not knowing what was going on, and as a result was incapable of consenting to the subject sexual activity with the accused. To rebut that testimony, the defense attorney needs to establish that the members need to look beyond the testimony of the alleged victim. Effective cross-examination must be conducted, at all times having the expected opinions of the forensic toxicologist in mind, in an effort to undercut the prosecutions evidence. Failure of the defense attorney to fully address this issue can, and likely will result in a conviction for an Article 120 offense, resulting in a punitive discharge, confinement for a significant period of time and a life-time of sex offender registration.